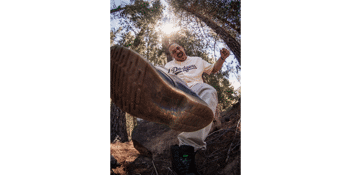 It is said that behind every strong man is an even stronger woman and growing up in East Kimberley, Dallas Woods was known only as Julie’s Boy. The legendary matriarch of their community in North Western Australia had raised her son on the storytelling of “Uncle” Archie Roach and had big expectations for her boy. And hasn’t he made her proud? Playing sold out shows across the country, appearing at Bluesfest, Groovin’ The Moo and supporting the enigmatic Sampa The Great and Baker Boy; the stratospheric rise of Dallas Woods is now set to continue with his new mini–LP Julie’s Boy.

Building on the million streams and counting of ‘Heaven of My Own’ and his viral earworm ‘If It Glitters It’s Gold’, Woods again brings his wicked concoction of blak humour, black humour and truth bombs, eviscerating clout-chasing imitators on ‘Vanilla Coke’ and ‘The Source’, whilst on ‘Moonboot Freestyle’ he takes it back to the street corners, dropping bars like his mates are beatboxing next to him. But the album’s centrepiece is ‘Grime’, produced by Jerome Farrah (who co-produced Kian’s monster hit ‘Waiting’), it’s a speed-rapping barrage of body blows that’s destined to be a future anthem loaded into every DJ’s Serato in the country.

It’s not difficult to see why the former triple j Unearthed Indigenous Artist of the Year has been labelled “powerful” and “blistering” by their Music Director Richard Kingsmill. With a flow that could battle Busta Rhymes, the conscience of Mos Def and as sharp a tongue as Ice Cube, Dallas Woods is now up in Australia’s face and he has something to tell us. It’s time to start listening.