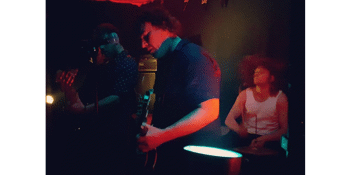 James McCann grew up in a small country town in Western Australia, five hundred kilometres outside of Perth, the most remote capital city in the world. As a teenager McCann was captivated by the classic Australian punk rock sound of The Saints, X, Radio Birdman and the Celibate Rifles.  By the early 1990s McCann was in Sydney, where he enjoyed a small taste of commercial attention with his band Harpoon, a hard hitting experimental rock band.

In the late 1990s McCann returned to Perth, playing in Maurice Flavel’s Gutterville Splendour Six, a loose collective of like-minded musicians that included Brendan Humphries (Kill Devil Hills) and Gareth Liddiard and Rui Pereira (The Drones).  Shortly after McCann formed the first incarnation of The Drones with Liddiard and Pereira.

The Drones covered the McCann penned song This Time as the last track on the 2005 Australian Music Prize award winning album Wait Long By The River And The Bodies Of Your Enemies Will Float Past.

Leaving The Drones behind, McCann’s rock’n’roll journey took him to Sydney, 3000 kilometres away on the other side of the vast Australian continent, and then south to Melbourne, the fertile home of Australian music.

McCann’s last album with the New Vindictives, Gotta Lotta Move - Boom!, released in 2017 on vinyl on French label Beast Records and on CD on Off the Hip, sees McCann return to the punk rock roots that inspired him as a teenager. Featuring a co-write with Penny Ikinger (I Can Control Your Mind) and a cover of Spencer P Jones’ Life in Jail, Gotta Love Move - Boom! is nine doses of punk-spiked rock’n’roll guaranteed to kick you into excitement.  This is a record awash with the punk attitude of the Sex Pistols, the rhythmic brutality of Feedtime and the leather-clad rock’n’roll passion of Motörhead.

In October 2017 James McCann returned to Europe for a four-week tour that saw McCann play gigs across France and Spain.  Joining him on the tour were the New Vindictives, comprising Tim Deane (Ron Peno and the Superstitions, Hired Guns) on guitar, Chris Taranto ( Bittersweet Kicks ) on bass and Jackson Kite on drums.

2019 saw the band return to the recording studio with Rob Younger ( Radio Birdman, New Christs ) as producer. The album was 3/4 finished when the COVID-19 pandemic hit Australia, and remains that way for the time being.

In 2019 James also performed and recorded with Alejandro Escovedo on Alejandro’s Australian tour. Alejandro and James recorded a track for the Spencer P Jones tribute album James has been producing over the last 6+ years due for a Beast Records ( FRA ) release October 2021, featuring such artists as Violent Femmes , Kid Congo , Chris Bailey , Drones and Paul Kelly and a whole slew of artists to be spread out over two volumes of double vinyl.

During the 2020 Melbourne lockdown period James kept busy with home recordings under the moniker SCAG, uploading tunes onto his JJ McCann Soundcloud page , look out for the SCAG single/video 13 Moons ( Burn Out ) in the near future to be followed by a full length SCAG album.

The story continues on jamesmccann.bandcamp.com