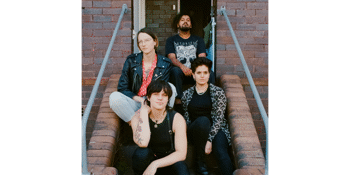 
Second Idol are known for their intense, ear-shattering live performances through their fondness of fuzz pedals and their fusion of alternative rock and post-punk influences. Ruthless and unapologetic, the band’s subject matter transverses across subjects of empowerment, diversity, political cynicism and queerness. In February 2021, They released their debut single "White Noise" to local and critical acclaim and played a string of Sydney shows in support of the release.

Originally founded by vocalist and guitarist Kate Olivia in 2017 under the name Bruise Pristine, Second Idol is comprised of Olivia on vocals and guitar, Maxine Gillon on lead guitar, Theia Joyeaux on bass and backing vocals and Afeef Iqbal on drums.

Recent career achievements include a support slot for Wolf & Cub, being added to rotation on ABC’s Rage, critical local acclaim for their debut single “White Noise” and an article on Triple J describing them as “garnering a must-see reputation for their rollicking rock shows.”

“White Noise is everything the music industry at this point of time has been missing, and it is certain that Second Idol are taking the industry by storm. It’s a strong and powerful song that will get stuck in your head, leaving you in a state of rebellion.”

“Charged bursts of captivating alt-rock-meets-punk-pop that sits inline with long-time influences from Sonic Youth and Savages, two acts whose everlasting imprint is still felt in alt-rock.”

“Teeth bared, Second Idol standing up with some fire in the belly here.”

“Really into that surging guitar in the back. It's got an edgy, 90's feel and badass energy.”

“There are few Sydney establishments that haven’t housed a Second Idol show, with the four-piece garnering a must-see reputation for their rollicking rock shows.”