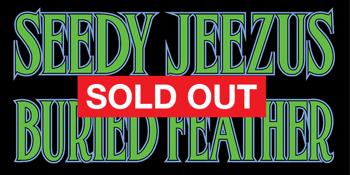 Seedy Jeezus once referred to as “The Bearded Shamen of Riffology” take the beast that is 60s psych and meld it to the throbbing corpse of 70s rock. Hard-working and always experimenting, these guys can go from tranquil soundscapes to mind-melting freakout, taking you on a sonic journey like no other. Local psych-trio Buried Feather shares the bill. With a sound built on fuzzy drone and swirling keyboards, Buried Feather’s live shows have built a loyal following.