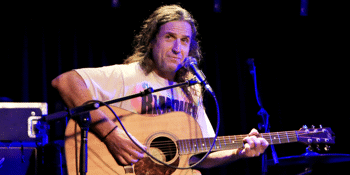 The Tote - Upstairs (Collingwood, VIC)
Saturday, 6 March 2021 9:30 pm
Today
18 Plus
Music
Australian Artists
Send this event to
PETER BLACK launches his brand-new Solo Albums "If This Is The Hand I'm Dealt" and "I'm Gonna Cheat As Much As I Can" with special guest RAUL SANCHEZ upstairs at The Tote on Saturday 6 March 2021.

Recorded over a two-year period, "If This Is The Hand I'm Dealt" and "I'm Gonna Cheat As Much As I Can" continue Peter's obsession with pop in all forms and are his best to date … so says Captain Sensible.

"Beautifully produced pop .. and pop with a capital P too. I don't know why anyone should be surprised because everything Blackie has done is quality - from the Hard-Ons up till now. But the addition of acoustic and harmony has taken Blackie into classic rock territory .. and if that means joining the likes of Brian Wilson and The Byrds why ever not. I'm sure there's still some thrashy punk left in the guy but for now, this is absolutely bloomin’ marvellous!"
– Captain Sensible (The Damned, Sensible Gray Cells)

"These two fantastic albums are simply bursting with ideas and, both lyrically and musically, there are surprises at every turn. Peter Black has outdone himself. As a songwriter, he has never written better songs than these, and as a performer/producer he has never sounded better than this. The albums feel like musical conversations and listeners will be constantly amazed at where that conversation takes them. Fascinating, entertaining and bloody brilliant!"
– Dave Faulkner (The Victims, Hoodoo Gurus)