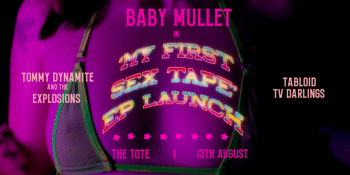 Grab your earphones and turn the volume up to maximum, ‘cause Baby Mullet are releasing their debut EP. Titled ‘My First Sex Tape’, the content is just what you’d imagine; in your face, powerful and a little bit cheeky. Featuring their new singles ‘Not Your Toy’ and ‘Tea’, the release showcases the fiery riot grrrl energy they’re known for along with so much more (just go listen after it’s release on 29th July and find out)

The punk thruple have been gaining momentum in the live music scene playing with bands such as Teen Jesus and the Jean Teasers, Bakers Eddy and Garlic Nun, and performing at events including St Kilda Festival and Melbourne Music Week.

Be at The Tote on Saturday August 13th for a night of sexy-up-in-your-grill punk and see what Baby Mullet’s first sex tape sounds like LIVE.