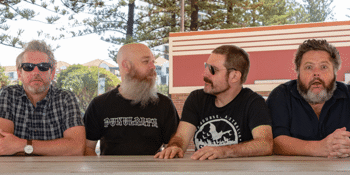 The Meanies - Better Late Than Never

Desperate Measures is a hard, fast and catchy onslaught of hard-hitting Meanies mayhem. It evokes the classic sound that made the band a household name in all the worst houses back in the '90s, and which has influenced generation after generation of young punks ever since.

Joining the Meanies as they take their desperate measures are one such group of rowdies - the mighty Dicklord”.