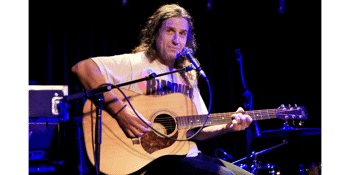 The Tote - Band Room (Collingwood, VIC)
Sunday, 6 June 2021 5:00 pm
24 days away
18 Plus
Rock
Send this event to
As Blackie, Peter Black has been wielding his Gibson SG in Sydney’s pioneering multicultural pop-punk phenomenon the Hard-Ons since the early-‘80s. Since he was 13 in fact. With the Hard-ons, Peter Black has had a hand in classic alternative hits like “Girl I the Sweater”, “Where Did She Come From”, “Just Being with You” and “Don’t Wanna See You Cry”, released over a dozen albums and over twenty singles and EPs, played the inaugural Big Day Out, toured Australia, Europe and the US countless times, built a legion of fans and influenced generation after generation of subsequent musicians.  You can ask everyone from Spiderbait and Regurgitator, You Am I  and Magic Dirt, through to Frenzal Rhomb and current chart breakers Private Function, and they’ll confirm that last point.

“It's no surprise that Blackie continues to follow his own vision of what constitutes solid songwriting, be it loud or soft or somewhere in between. Obviously the comparison will always be made to the thrashier punk rock origins of Hard-Ons, but at their core of anything written (and presumably enjoyed) by the one and only Blackie has the same level of detail and understanding of the mechanics and mystery of all music at its core. The world may have a few too many punks with acoustic guitars in this day and age, but if the 35+ years and counting of Blackie's musical legacy proves anything, it's that his music follows no trends and answers to no-one but his own creative ambition and outlook.” – Joe Hansen (Private Function, Clowns)

"It’s great how far reaching and ambitious Peter Black’s solo stuff is. Great vocal melodies. The Hard-Ons were – still are -  amazing. Musically, but also for what they were. This multi-cultural band. I remember Ray telling me stories of their encounters. Blackie must have seen a thing or too. They were fearless. Ray and Blackie always came to Dirty Three shows in Sydney early on, and I always felt that we were somehow aligned attitude-wise. They were awesome live, with that power that only a trio can have. They also wrote the best singles! Beyond that, they always did whatever they wanted. And Blackie continues that. Neither of these new albums are what anyone would expect ....  “ – Warren Ellis (Dirty Three/Nick Cave & The Bad Seeds)