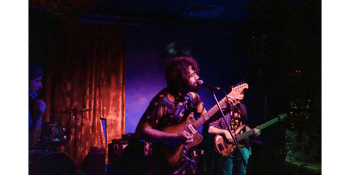 The Tote - Upstairs (Collingwood, VIC)
Friday, 11 February 2022 9:00 pm
17 days away
18 Plus
Alternative
Australian Artists
Send this event to
Psychedelic folk and blues artist DOM BRINKLEY released his debut EP 'MOONLIGHT DREAM' (featuring the singles 'Crying' and 'Little Sparks')  last year to a sold-out show at Bar Open, right on the cusp of one of several Melbourne lockdowns. Now, Dom and the band return to the stage to flesh out his EP and bluesy releases over the past two years. This first show back is the start of a very exciting year Dom has in store for 2022. Supporting Dom will be hard rockers DARK DAZE, who are known to bring down houses with their wall of sound. Opening the show will be three-piece OVEN GLOVES, who will entice attendees with their merging of 90s-influenced rock and folk sounds.