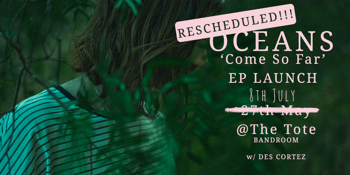 Melbourne based artist Thomas Lee launches his debut music project Oceans - a fusion of
shoegaze and ambient electronic soundscapes. 2020 saw listeners get their first glimpse of
Oceans with him featuring on Atalein’s single ‘Touch’. Tom has also hit the ground running
for 2021 preparing for the release of his debut EP on the 27th of May. Oceans will be debuting their EP live at The Tote with Des Cortez on the 8th of July.
Coming from a multi-instrumentalist background, Tom has explored the various timbres of
guitar, piano and programmed drum machines in his formative years. It wasn't until
discovering the vast catalogue of 90s shoegaze and ambient electronica that he considered
finding his own musical voice and began his journey into songwriting. This sparked his
interest into collecting vintage analogue synthesizers and boutique guitar pedals to create
the unique sound that is Oceans.

Tom made his head-turning debut as Australian shoegaze’s latest initiate Oceans, with his
immersive tripped-out single ‘Come So Far’ - the title track from his debut EP. After being
added to Spotify’s New Music Fridays AU & NZ along with some other notable Spotify
playlists such as Just Chill and Night Shift, the track garnered the fledgling artist an
instantaneous and sizeable listenership from eager fans and industry insiders alike
From then, Oceans has taken to the stage, playing tracks from his forthcoming EP and
debuting tracks that are yet to be released to sold out shows at Some Velvet Morning and
Bar Open. Oceans are in the midst of recording new material to share with the world and
planning for more shows with other prominent acts from Melbourne and interstate.