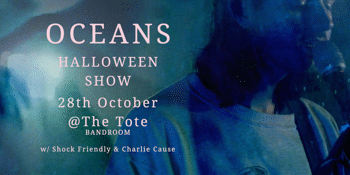 The Tote - Band Room (Collingwood, VIC)
Saturday, 12 February 2022 8:30 PM
18 days away
18 Plus
Alternative
Australian Artists
Send this event to
Following the release of their debut EP ‘Come So Far’, Oceans is set to take the stage of The Tote again. Joining them on the night are Melbourne locals Shock Friendly and Charlie Cause.

2021 has been a big year for Oceans with the release of their debut single and the title track off the EP ‘Come So Far’. The single has clocked over 200,000 plays on Spotify and has been a favourite among many. Following the success of their two singles Oceans launched their debut EP to a sold out crowd at The Tote and now they’re ready to hit the stage again with new material from their forthcoming collab EP with UK-based shoegazers, Wilt.